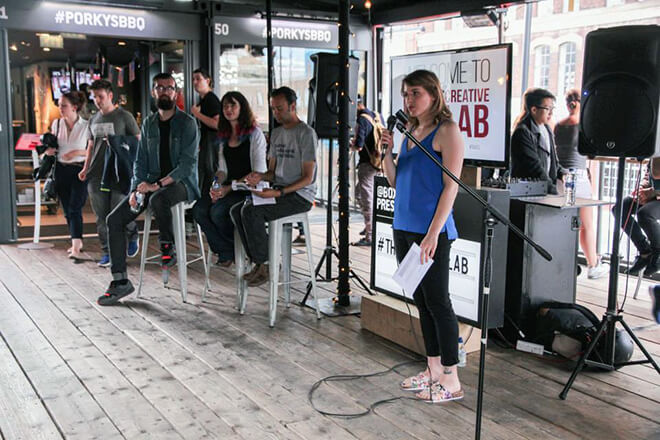 I recently discovered a London-based collective that is doing something fresh in the field of crowdfunding, and that could successfully be applied to music. NX Creative Lab organizes events where attendees vote on projects and the winners leave with cash. I loved the idea and talked to Alexandra Střelcová, one of the founders of NX Creative Lab.

What is NX Creative Lab?

Alexandra Střelcová: We’re a collective of five friends working throughout creative industries in the UK and Europe. Together we run a series of live crowdfunding events that aim to provide social and financial capital to early-stage entrepreneurs mainly from creative and cultural practice. The main point is, imagine how many awesome business ideas are actually never realised because the people behind them lack the right resources at the right time – the same goes for ideas and projects focused on classical / contemporary music. There are tens of crowdfunding platforms online but meeting these people in real life makes things even more exciting – you can ask them anything, network with like-minded folks, and most importantly – support people and projects you see on your own eyes. It’s like Kickstarter but it’s offline, in real time. Plus, beer and good vibes is always involved as is the emphasis on local communities and their needs.

How often do you hold real-time crowdfunding events?

AS: We began in November 2014 and so far, we’ve hosted four events. Each has a different theme, for instance “taste”, “spaces” or “sustainability” – and we’re currently looking at vol. 5 to be held some time in May, although we can’t announce the theme yet.

How does an evening unfold?

AS: There is a £3 entrance fee, for which you get two votes. Candidates pitch their ideas, then you vote. The winner gets all the money raised during the evening.

Additionally, the first part of the event is also focused on panel discussion joined by successful entrepreneurs who share their experience on creativity in business. We’ve had guests from Field Day Festivals, Pint of Science, Anspach & Hobday or the Hatch Entreprise Incubator. It’s fun to see those who have already made it in direct interaction with early-stage entrepreneurs, and some interesting collaborations have already occurred as a result of it.

How are these events usually received/appreciated?

AS: We’ve had great response so far, in fact I don’t really understand it myself! I guess it’s because this is not a dragon’s den style event, we ditch the notion of entrepreneurs as The Wolf of Wall Street (or the Silicon Roundabout), no stressful pitches just laid-back atmosphere and potential of networking with like-minded folks. Plus, thanks to our background we naturally focus on artists and creatives and generally people who take investment and money seriously but are also committed to high aesthetic / artistic standards of their ideas.

Richard Branson came once and he thought it was cool.

But we won the Goldsmiths Innovation Award 2016, which we are extremely chuffed about. It also means other people think it’s cool which may have further potential to support more awesome ideas!

What is the average amount of money a winner walks away with?

AS: We started at around £150, now it’s around £300 which is still not much but again, financial capital is only a part of what the events serve for. It’s mainly about presenting your idea to real people who may then be very interested in funding your project, and then sharing the success story with them. Connecting, collaborating, getting to know what real people – who often actively participate in your community / industry actually want.

Have you funded music projects in the past? How common are they?

AS: We’ve had quite a few music projects, yes. One of our winners are LBD Issues, a London-based label that focuses on reissuing old independent disco / soul / jazz records from 1970’s – 1980’s Czechoslovakia. They won the Lab in June, and now the first vinyl is going to the pressing plant, planned to be released some time this spring. We’ve also had Eightfold Way – a great project by American sound artist Mark Geary who engages with artists and practitioners in the field of experimental art and explores new strategies to advance traditional listening experiences. Also, we’ve had projects focused on ways music can help patients with post-stroke conditions and other music therapy ideas.

You are currently thinking about memberships. What are memberships in the context of NX Creative Lab?

AS: The membership scheme is mostly focused on potential investors who are interested in supporting our collective on long-term basis. This is a way how we could build a strong network of creative entrepreneurs which could exist both within and beyond NXCL events as such. However, we’re still looking at best ways to design the scheme so stay tuned for more information!

What do you think? Would this work for music? Could you see ensembles, performers, or composers showcase a project an win the evening’s prize? Let me know what you think in the comments below!