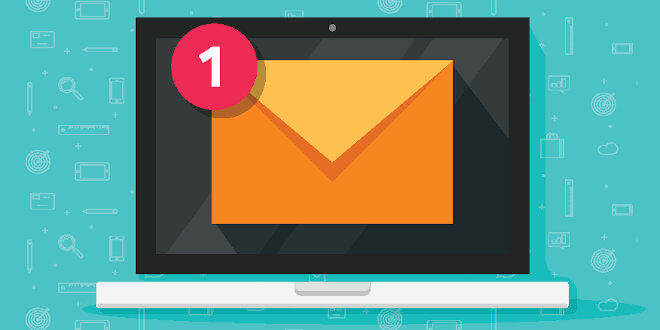 I seem to be getting more of them, these days. I’m talking about emails that (finally) get to the point. The email marketing equivalent of an app: Something that does one thing, but does it well.

Apparently, the average attention span in 2015 (so far!) is 8.25 seconds. If that’s all we get from an email reader, shouldn’t we really cut to the chase?

Forget about this write-up that you just got (people probably don’t care) or this other fluffy thing that you have enough room to fit in your newsletter. What is the single most important thing that you’re communicating today? What the single action you’d like your readers to take?

Do them a favor

What we do know, is that less choices means faster decisions (thanks Hick and Hayman). If we boil it down to one choice, we’ve hit the minimum effort that one needs to make a decision. In the end, people are interested or they are not, and their time is precious. I’m ready to bet that readers will really appreciate the time you’re saving them by going straight to the point.

So it’s out. And I won’t leave Rdio for Apple Music—it’s a usability nightmare—but that’s besides the point. This email is laser-focused: one logo, one hero image, one lead-in, one CTA. Note how the features (or are these benefits?) appear below the image, and well below the CTA.

It’s all about recipes, but rarely about food. IFTT is one of those platforms (there are others) that help you get APIs to work for you. To promote the impact of APIs on one’s lifestyle, IFTT is apparently running sweepstakes. Here we have: a big hero (that has pretty much all the info one needs), a lead-in, a sample of what’s available to win, and a CTA. 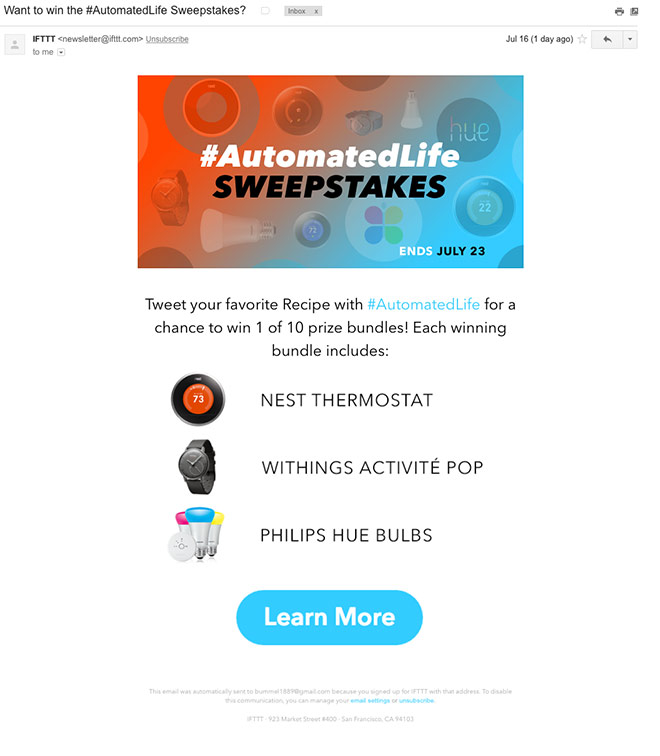 The great “save for later” app will now read articles for you on iOS. That’s big news for them—and their iOS users—and they really want people to update their app. That’s it and that’s all this email does. Even though I feel that this message could use a bit more negative space above the hero, it is still very efficient. Note the use of their branding color and how they keep the red for the CTA, and not for the body link… 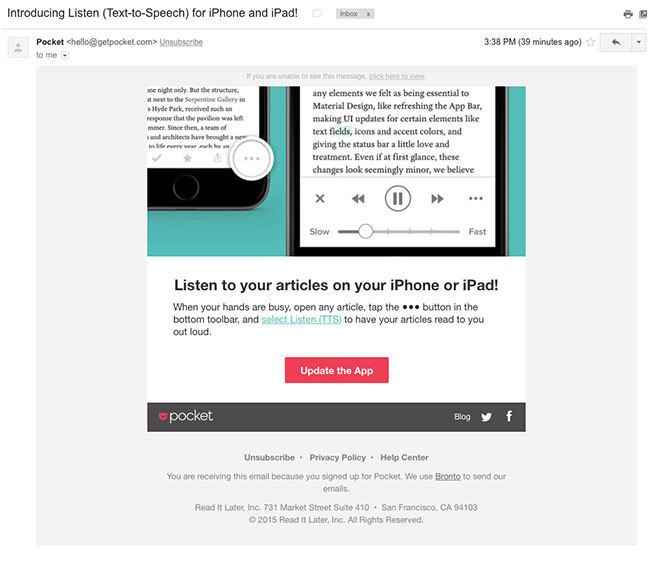 This won’t work for all of your email communications, of course. A newsletter has value, too. But what if you tried to let go of what gets in the way of the single most important action you want your readers to take?

Are people on your team afraid? They won’t let you do it? Just take bets and A/B test it.