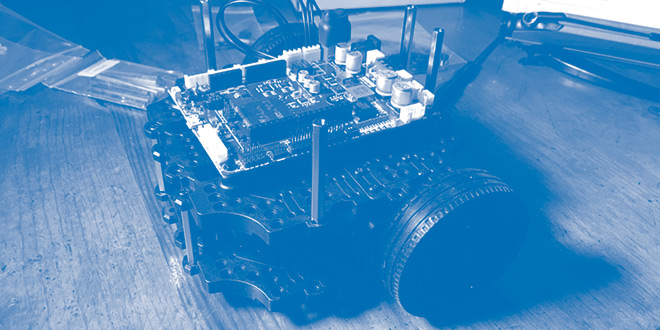 TwitterFacebookPinterestEmail
I am selling my TurtleBot3. Drop me a line if you are interested!

Happy birthday to me. This year, I got myself a robot. But not any robot: A TurtleBot3, a ground low-cost personal robot running on open-source software.

It’s been a goal of mine to teach myself ROS (Robot Operating System) and the TurtleBot3 is the ROS official platform.

Melonee Wise and Tully Foote created the TurtleBot at Willow Garage, in November 2010. It is in its third iteration and it is now available in two different models: the Burger and the Waffle. Whether they’re turtle-flavored or not, the wiki doesn’t say. I ordered the Burger sometime in early July and got it a week ago.

I’ve started building it and I thought I would share some photos and some thoughts.

Yes, this is a bit of an unboxing post

The TurtleBot3 is not a toy. It’s a great tool for education, research, and product development. As a result, I wasn’t expecting any fancy packaging.

Well, I should have because it’s well done. Pretty much all the components are packaged in four square boxes inside of a carrying case. Only the battery charger and its power cable are not inside of these four boxes. Here are some photos:

Issues with the hardware

The documentation—both online and the manual shipped with the robot—is very strong. I’ve only ran into a couple of things that lacked clarity, though:

The documentation doesn’t show where the DYNAMIXEL cables should connect to the OpenCR board on the second layer. The DYNAMIXELS have a specific orientation and an ID number but they’re not mapped to the pins on the OpenCR:

I ended up trying one way that ended being right. A quick test lets users try if the OpenCR is cabled correctly: Pushing SW1 moves the robot 30 cm forward, pushing SW2 rotates the robot 180 degrees in place.

Issues with the TurtleBot3 software

The version of Firefox that came with Ubuntu Mate (for Raspberry Pi 3) was not stable. It worked fine for a while and crashed after a couple of sessions.

It’s not a deal-breaker when you need to install ROS, but it’s a bit inhibiting not to have a browser in Ubuntu! I am looking into ways to install Firefox 52 (that seems to be stable in Ubuntu Mate) through the terminal.

Since I still have two layers to build before I can really have fun with some SLAM and teleoperation, I will update this post with other issues I might have encountered.

In the meantime, here’s a nice behind the scenes video: