I interviewed Mason Currey for I CARE IF YOU LISTEN. I am reposing it here

By writing this book, I feel that you were trying to debunk the poisonous and lasting 19th c. myth of the muse, but also to find answers for yourself. How did it help you? Have you experimented with some of these routines?

I was definitely trying to find answers for myself, and researching the book did change my habits in one important way. I’ve always been a hopeless morning person—I do my best work early in the morning, immediately after waking up. But for most of my life I would only get up really early if I had some sort of deadline or crunch period. When I started compiling this book, however, I was also working a full-time job as a magazine editor, and the only way to get everything done was to get up really early every day. So I got in the habit of waking up at 5:30 a.m. every weekday morning and working on the book for two hours before breakfast. Those early-morning work periods really saved me. And now, even though the book is done and I have a much more flexible schedule, I still get up at 5:30 pretty much every morning. I realized that if that’s really my best time, I should take advantage of it every day, not just during crunch periods or work emergencies.

Talking about routines usually brings up stories of success but your book also mentions some failures and real hardships. Any advice for people who are having issues starting a creative routine?

I think the trick is to figure out what time of day you feel mentally sharpest—I’m best in the early morning, but I definitely think this varies from person to person—and then do whatever you can to set aside some time for your creative work during those prime hours. Even if you can only carve out 30 minutes or an hour a day, that can be enough to make real progress, provided you keep at it every day (weekends included, if possible). The repetition itself—doing the same thing at the same time every day—can be incredibly powerful; you can really train your mind to get into a certain creative space in those daily work periods. 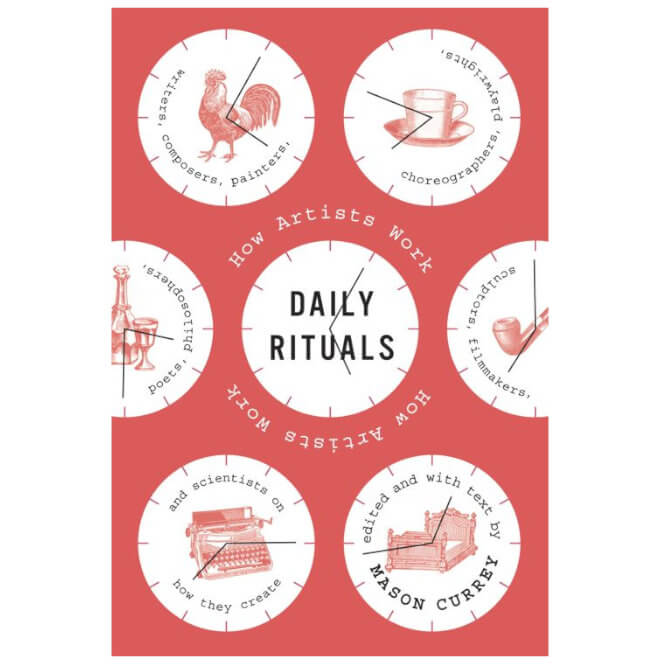 Some habits you mention are quite unhealthy: I’m thinking about Schiller’s or—even worse—Sartre’s. Was there one that you read about that was particularly excessive?

I think Balzac probably had the most extreme work routine. He ate a light dinner at 6:00 p.m., then went to bed. At 1:00 a.m. he rose and sat down at his writing table for a seven-hour stretch of work. At 8:00 a.m. he allowed himself a ninety-minute nap; then, from 9:30 to 4:00, he resumed work, drinking cup after cup of strong black coffee. (According to one estimate, he drank as many as fifty cups a day.) At 4:00 p.m. Balzac took a walk, had a bath, and received visitors until 6:00, when the cycle started all over again.

Many composers are featured in your book: Igor Stravinsky, John Adams, Steve Reich, Dmitri Shostakovitch, etc. Do you feel that composers have different routines due to the sheer nature of their craft?

Actually, I found that there were a lot of similarities between composers’ and writers’ working habits. Both need long stretches of solitude to do their work; both seem to veer between occasional bursts of inspiration and long stretches of painstaking labor; both find that a daily walk can be a really useful way to get new ideas and break creative blocks.

The real difference was with the visual artists. Several painters in the book—like Picasso, Matisse, Miró, and others—talk about how time seems to evaporate when they’re at the canvas, and how they can easily spend all day absorbed in their work. Writers and composers don’t seem to get into that flow as often; their work requires more of a nose-to-the-grindstone approach.

Did you see technology—any technology—shape certain routines or change them over time?

I noticed a real change in my subjects’ attitude to their correspondence. Many of the historical figures in the book set aside a portion of each day to read and answer letters, and this was often something they enjoyed and even found useful for their work—a number of novelists and poets used letter-writing as a way to warm up for their literary projects. By contrast, pretty much all of the contemporary writers, composers, and artists I interviewed were extremely wary of e-mail. Many of them talked about how looking at e-mail can be really dangerous, how a couple of complicated e-mail exchanges can very quickly ruin your concentration for the entire day. In general, I think that contemporary artists have to contend with many more distractions than ever before—so learning to shut out those distractions for a portion of the day has become an invaluable skill.