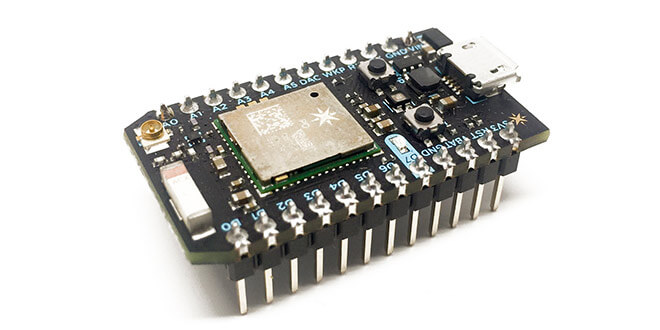 I anticipated a few power issues from Arduino to the ESP8266 so I ordered a 5V – 3.3V adapter. The ESP8266 is not very breadboard friendly, so that made it easier without having to worry about power.

Well, it turned out that Arduino was not powerful enough for the ESP8266: I was not getting any blue light (only the red one) and only garbage on the serial (regardless of the baud rate).

I thought about building a voltage divider with resistors but it’s apparently a bad idea to regulate a power supply. Ach. I then got breadboard 3.3V/5V power supply modules but that didn’t help much.

And then, after a couple of hours of research, I found this great tip:

James Lewis—the Bald Engineer—shared this in his article Four ESP8266 Gotchas and a tip for a first time users. I should probably have started there. I will come back to the ESP8266 later (Alasdair Allan will be releasing an interesting book in January 2018).

My plan was always to get a Photon; it just happened a lot earlier than expected!

Particle has an excellent companion iOS app that makes setting up a Photon a breeze. It took me about 5 minutes to walk through the steps outlined by the app (after hours of frustration with the ESP8266).

The online builder is convenient but I immediately jumped into a project and I needed to read from the USB serial. It was easier for me to download the desktop IDE for Mac.

I was up and running in minutes and my project was completed in an hour or so. I’ll describe it in my next post but I wanted to talk about the Photon separately.

From the unboxing, to the set up, the IDE or the support documentation, everything was truly delightful. Again, if I hadn’t struggled for hours with the ESP8266, I would probably have a different impression but working with the Photon came as a relief.

Right now, my first project is powered by an AC to USB (micro) adapter but I need to look into batteries (especially if I get into 3G/4G IoT projects).

I also need to look into System.sleep() to improve the battery life or the lifespan of one of my sensors.