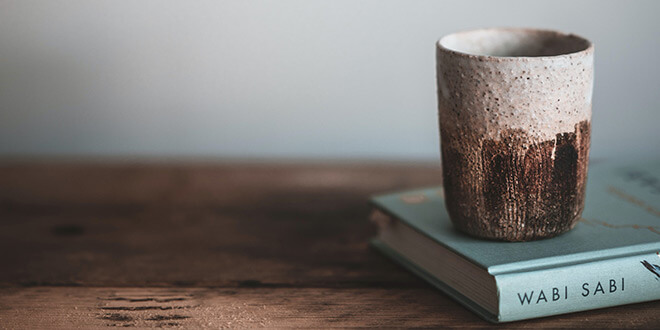 In western popular culture, Japan is often associated with minimalism: Marie Kondo wants you to reduce your clutter; Muji’s stationery is understated.

This kind of minimalism can rely on symmetry, smooth surfaces, or light colors.

However, at the opposite end of the spectrum exists wabi-sabi. This world view teaches us about life and creativity.

Tea as a catalyst for wabi-sabi

The Oxford dictionary defines wabi as “a quality of austere and serene beauty, expressing a mood of spiritual solitude recognized in Zen Buddhist philosophy.” Sabi refers to “the appreciation of the old and faded (source).”

Both terms existed separately until they coalesced in the 16th century when tea master Sen no Rikyu (1522-1591) redefined the tea ceremony in Japan. Until then, China’s rich and ornate tea culture was the norm. Rikyu designed tea houses and accessories inspired by Japanese farmers’ rustic lifestyle, thus popularizing wabi-sabi.

Wabi-sabi has since been an aspect of Japanese culture (“the quintessential Japanese aesthetic,” according to Leonard Koren).

Wabi-sabi as a system

By joining two words that describe a spiritual quality and a material quality, it is not surprising that wabi-sabi represents a complete aesthetic system. Koren in Wabi-Sabi for Artists, Designers, Poets, and Philosophers breaks it down into the following components (quoted in full):

Things are either devolving toward, or evolving from, nothingness.

A lot of what Koren describes can be used as guidelines for a creative practice that suggests intimacy and invites introspection:

Things wabi-sabi are usually small and compact, quiet and inward-oriented. They beckon: get close, touch, relate.

Or help us reject preciousness:

Things wabi-sabi are appreciated only during direct contact and use; they are never locked away in a museum.

Make it your own

Wabi-sabi invites us to look: whether it is at nature, details, or to question ugliness.

Wabi-sabi is a path for self-acceptance, too. We are imperfect, coming from and going toward nothingness.

The balance of the spiritual and the material brings meaning to one’s creative pursuit.

By describing the essence of wabi-sabi, Koren (accidentally?) shares a pearl of wisdom:

Pare down to the essence, but don’t remove the poetry