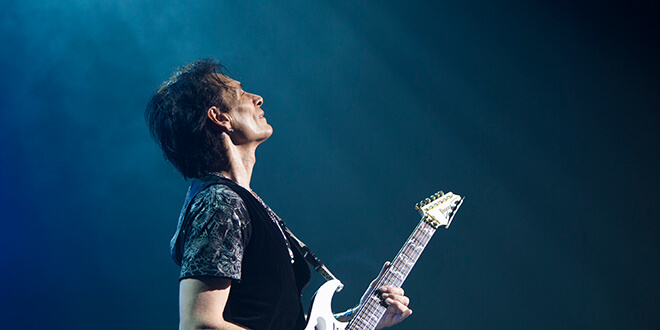 My early teen years were all about metal and guitar heroes. My favorite was Steve Vai, whom I discovered through his 1990 album Passion and Warfare.

The most iconic piece on the album—and arguably in Vai’s repertoire—is “For the Love of God.” A 6 min epic ride.

Last week I fell into yet another Vai rabbit hole on YouTube and found a video masterclass on this very piece. I was curious to see him dissect it and share some insights into his playing. I was delighted to see that he also shared some great gems on creativity and process. I am quoting some here.

It is easy to forget how much work an artist puts into a piece of art when we only see it finished. It can be discouraging, too.

Like many great pieces, “For the Love of God” started with just a chord that inspired Vai to sing a melody.

As soon as I feel that there’s something that could be good there, I grab a tape recorder, and I document it.

Thankfully for us, Vai doesn’t throw anything away:

It sat on a shelf for many years. I knew there was a seed there.

While working on Passion and Warfare, he took the idea off the shelf and labored to bring the piece to life, through hours of recorded improvisation and melodic exploration.

And allow them to grow

If Vai had just given up on that tiny idea–just a chord!–he wouldn’t have written the only piece he’s been playing at every concert for the past 30 years.

Something that’s there, even if it’s not great. Don’t second guess yourself. Just capture it!

Of course, not second-guessing oneself is sometimes very hard! I’m reminded of Hugh MacLeod who says in Ignore everybody: “You don’t know if your idea is any good the moment it’s created.”

Vai talks about being in a “receptive mode” to allow ideas to come to and through us. I believe that he is referring to Abraham-Hicks’ three steps to creativity.

Do it for yourself

You’re the only person to think about when you write something: Does it move you?

Trying to please an audience we think we know (I’m paraphrasing MacLeod, here) doesn’t work. And it’s not really fun either. Writing/building/composing for oneself brings better work to life.

Boredom is an illusion

Vai is really passionate about his craft and uses language that my violin, piano, or voice teachers have used with me: he talks about variations, leaving room for a piece to go somewhere, etc.

If you put your attention into what you’re playing, there is no end to how deep you can get into the melody.

If we get bored with our work, could bringing more mindfulness into it reveal new depths? I know I’ll try.

I leave you with a 1996 live, over the top performance of “For the Love of God.”