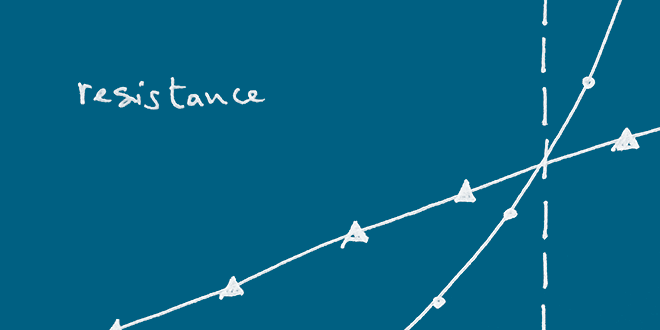 Creative resistance is a phase that most—if not all—creatives experience at one point in their practice. Creative resistance (or the universal force against creativity) is a concept created by American novelist Steven Pressfield and featured in his book Do the work. In this post, I’m describing it and offering a strategy to overcome it.

The 2 seasons of Important Things with Demetri Martin aired in 2009-2010. They really capture the essence of his early comedic style, full of puns, paradoxes, and graphs.

His graphs are brilliant. They have a unique way of illustrating facts that we never quantify, like the association between memory and the senses.

As a direct result of Martin’s influence, I will often express things in graph form for myself. I’d like to share one with you.

Creative resistance: It hurts both ways

If you are a creative person, you’ll know what I mean when I talk about:

I’m sure you can name a few more situations.

It usually feels terrible, and it doesn’t get better over time. I’d even say that it gets worse, and we are tempted to avoid the pain.

The alternative is making, creating. But that can be painful too. So what are we supposed to do?

These two choices of creative resistance can be described as two kinds of pain: the pain of making and not making.

I believe that one hurts more than another. I also think that it’s helpful. Let me share a shitty graph:

In the beginning (right after we broke a streak, for example), the pain of making is higher than the pain of not making. So as predictable humans, we prefer not making.

Except these two kinds of pain do not evolve the same way. I am not 100% sure one is linear, while the other is exponential, but this is how they feel.

Even though your slopes may vary, there is a time when these two pains intersect—a tipping point. Any time before this point is a time of creative resistance, but as soon as the pain of not making is higher than the pain of making, we enter a time of action.

So what does this mean? I believe that by bringing mindful awareness to your creative resistance, the slope gets steeper. In other words, we leave resistance faster. And as creative people, this is where we’d rather be.

All the time I’m not writing, I feel like a criminal. It’s horrible to feel felonious every second of the day. It’s much more relaxing to actually write.

What is your experience? What are the strategies you use to release your practice from the grip of creative resistance? Let me know in the comments.