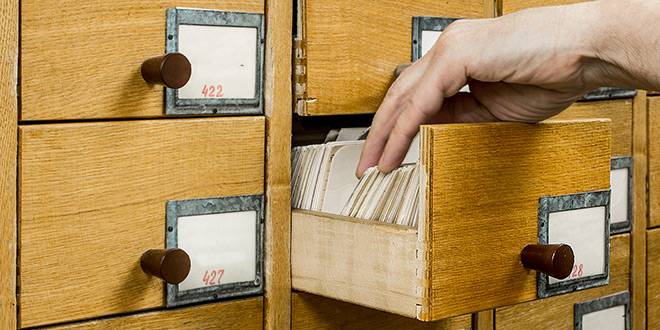 Let me ask you a question:

What have you done with the text you underlined in that book you read last week? And have you revisited the other book (you know, the one with so many great quotes that it’s full of dog ears)?

In other words: Are you satisfied with how you manage all those great ideas you’ve read about in books?

I wasn’t. But that changed recently.

Over the past few years, I’ve tried to come up with a system that would allow me to track the most salient ideas in the books I’ve read.

Nothing worked: I felt like regardless of how much I read, my knowledge was as good as my memory… and that was like filling a leaky bucket.

Do you ever feel this way? If so, I’ve got some good news. There is a solution! 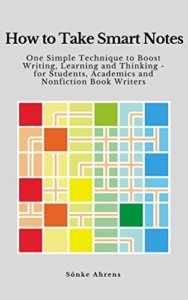 Sönke Ahrens wrote a terrific book titled How to Take Smart Notes (affiliate link) for “Students, Academics, and Nonfiction Book Writers.” The tool at the core of the book is the Zettelkasten, which is German for “slip-box”—  a helpful note-taking method invented by Niklas Luhmann.

Luhmann was a prolific German sociologist who wrote more than 70 books and nearly 400 articles. He invented a way to think through writing, relying on rigorous and systematic note-taking. He’d write ideas on small index cards, number them, and file them in a drawer.

In his Zettelkasten method, there are three kinds of notes:

Luhmann designed a terrific way to number permanent notes and thread them. At the end of his career, his Zettelkasten contained 90,000 notes.

It’s not about the notes: A second brain

The Zettelkasten is more than a collection of index cards (paper or digital). It is a tool to augment our memory and our thinking. As Ahrens writes:

“We need a reliable and simple external structure to think in that compensates for the limitations of our brains.”

By systematically entering notes in a Zettelkasten, we make better use of our brains:

“The slip-box is designed to present you with ideas you have already forgotten, allowing your brain to focus on thinking instead of remembering.”

To put it another way …

The Zettelkasten is a way to write from the bottom up; you don’t need to write an outline or a plan. You can simply consult the box and follow a thread of pre-written arguments. Those great ideas are already written down in your own words, backed by references, and interconnected in a network that you built.

Because it’s been used primarily by scholars, the Zettelkasten is focused on writing, but I believe that any creative (and as such, curious) person whose work depends on generating new ideas could benefit from it.

Build your own Zettelkasten

You could go paper, like Luhmann, but you would run the risk of losing your notes (if your data doesn’t exist in three places, it doesn’t exist at all).

I decided to go digital, and Sonke’s book introduces a series of tools for keeping notes and references.

For my reference system, I use Zotero, a “free, easy-to-use tool to help you collect, organize, cite, and share research.” It is available on Windows, Mac, and Linux, as well as a web app and browser extensions that let you add a reference from a web page. It is straightforward to add notes to each reference, whether it’s an article, a book, a podcast, etc. Oh, and try dragging and dropping an academic paper in PDF form inside Zotero and watch the application populate the metadata for you. (It’s beautiful.)

I picked Obsidian as my digital Zettelkasten (although Zettlr has some very powerful features, too). Just like Zotero, it is free (the dev team welcomes financial support) and it stores notes as Markdown files in a folder system. Linking notes is done through wikilink syntax, and a graph view shows how interconnected they are. 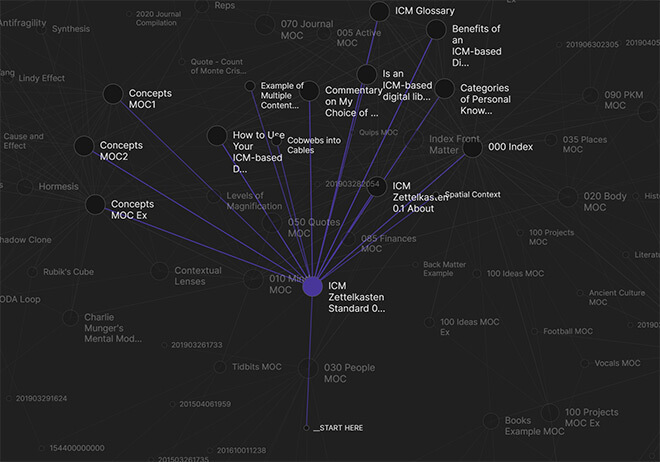 As you see, in Obsidian clusters are a visual way to detect ideas worth exploring, since they’re well connected.

I keep my Zettelkasten notes in a Dropbox folder that I sync with my Mac, Windows, and Linux machines, so they’re always up-to-date and available on every machine in my house.

Building a Zettelkasten takes a while

I have a baby Zettelkasten. A newborn, really, right now. It will take a few years of nurturing to start having conversations inside and with the Zettelkasten. Keep this in mind if you expect insights to jump at you fast—they won’t.

But like anything worth doing in life, it’s about the process.

The sooner you get started, the sooner you will have your very own way to keep track of those fleeting thoughts and literary ideas you come across.

And won’t it feel good to know that you’ve put duct tape on that leaky bucket and your knowledge will begin to improve and increase instead of vanishing week after week?