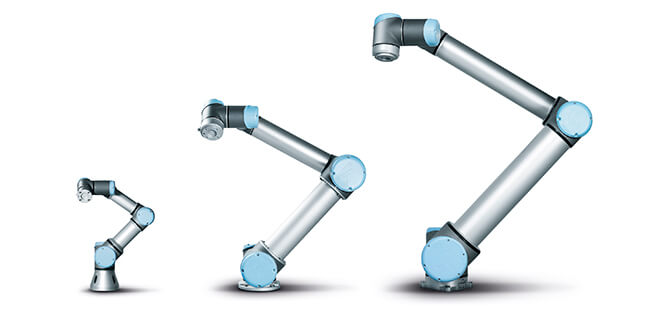 On October 4, I attended a Universal Robots seminar in Rochester, NY. It was hosted by Ralph W. Earl, a leading distributor of motion control components in Upstate New York and Northern Pennsylvania. The goal of the seminar was to introduce the idea of collaborative robots (cobots) as well as the full line of Universal Robots.

Traditional industrial automation usually looks like this: A big yellow fence around a very large, immovable robot, dedicated to one task. People deem these robots unsafe, hard to program, and they require a lot of volume to justify such an investment.

Cobots, on the other hand, are designed to work alongside operators, are safer to use (no fencing is needed), easier to program (GUI), and are usually mobile. It means that a cobot can be redeployed and reprogrammed by an operator—not a robotics engineer—in a matter of hours, to work on a very different task.

The projected growth in the cobots industry is impressive: numbers vary but the most optimistic report I’ve heard of expects the cobots market to reach $4.28 billion by 2023 (it was valued at $176.7 million in 2016).

Cobots are ideal to complete tasks that are:

New factory employees (who sometimes quit in the middle of their first shift) usually get these tasks or they are assigned, on a rotating basis, to multiple employees: It is not their primary job but somebody’s got to it.

Some tasks are easier to automate with cobots than others, though (see Moravec’s paradox): 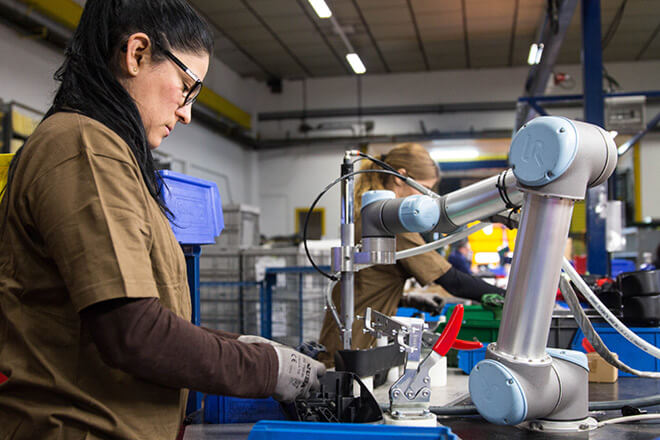 A note on UX

The first thing that strikes me when I look at a Universal Robot is the color.

The United States Department of Labor’s Occupational Safety and Health Standards (Part 1910.144(a)(3)) states that:

“Yellow shall be the basic color for designating caution and for marking physical hazards such as: Striking against, stumbling, falling, tripping, and “caught in between.”

Universal Robots stayed away from yellow and uses a light blue instead. I see this as a suggestion that these cobots are safer than the yellow robots people see in factories.

An operator can program the UR cobot through scripting, or through the PolyScope interface, on the attached touchscreen. The screen is bulky and leaves only one hand available for both programming and handling the cobot in freedrive (moving the arm by hand, from waypoint to waypoint).

I might have been the model I was using, but the sensitivity of the touchscreen was bad. I had to tap multiple times to switch tabs and I often noted calibration errors. The Polyscope interface didn’t take advantage of gestures that are now standard on touch screens such as pinch, spread, or press-and-drag.

The UI did not help either. It felt like using a desktop application through a touchscreen (and I bet that’s the case). I noted a serious bump in the quality of the UI when the presenter switched to Robotiq modules, though. 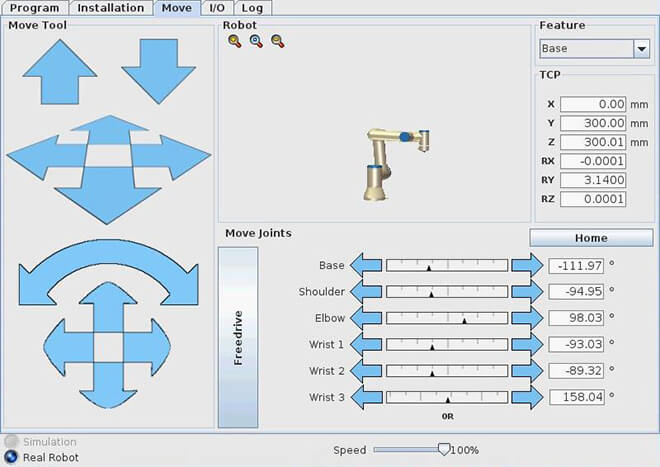 The UR line impresses with its flexibility (in terms of motion and deployment) but they feel a lot like blind arms.

Yes, all arms are blind, I know. But some cobots go further and offer feedback and social cues for their operator.

Sawyer (and Baxter) are the best example I can think of. Manufactured by Rethink Robotics, Sawyer was the world’s first collaborative robot, and the brainchild of robotics legend Rodney Brooks.

Brooks brought his experience in social robotics to industrial automation. Sawyer ships with embedded vision and a screen that conveys emotions and cues to its operator—making them more comfortable.

See what I mean? I am not sure if the eyes follow the gripper but it would make sense.

I love the term cobot. It is a great antidote to the ongoing job robocalypse: Robots are not going to take jobs but enhance the way humans work.

For this to happen, though, we need to take a step towards making robots more social. Now defining what makes a robot social is another topic that I plan to discuss here but this seminar left me wondering: Does Universal Robots miss the mark compared to Rethink Robotics? How much more efficient are cobots if they are designed to be social?