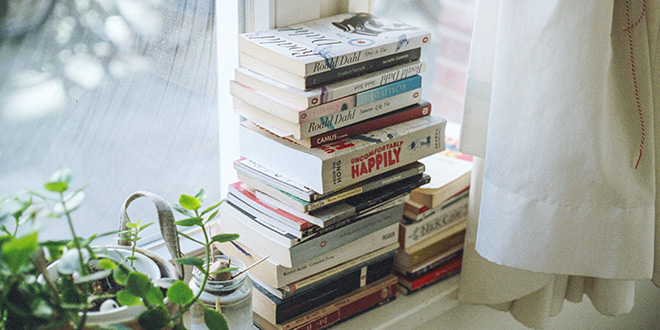 The music is good, the lights are dimmed, and the smell of ink and paper tells you that you’re “home.” You are browsing the shelves of your favorite bookstore when a volume catches your eye.

It is not a book you need. It’s not anywhere near the top of your to-read list. But you have to buy it.

You already know where you’ll put it: on top of the pile of books on your bedside table.

Does this sound familiar? Too real?

Do you sometimes feel bad about your book-buying habit?

Well, you’re not alone. And what is more, it’s not a bad thing to have a few “too many” unread books lying around.

Read on, my friend, to learn about the Japanese concept of tsundoku.

Finding out that a familiar experience actually has a name (like the Baader–Meinhof phenomenon) always feels like a small epiphany. Learning about tsundoku was one of those “ah-ha” moments for me.

The word tsundoku is a combination of two Japanese terms: tsunde-oku (to let things pile up) and dokusho (reading books). In other words: buying books, stacking them up, and never reading them.

How is tsundoku different from bibliomania?

While bibliomania is commonly used to describe a passion for collecting books, it can also refer to a disorder that leads people to collect books excessively, to the point of compulsive hoarding.

Bibliomaniacs might not even be interested in reading but have an extreme attachment to books (sometimes leading to theft) and a strong aversion to the loss of those books. For example, Sir Thomas Phillipps (1792–1872) amassed over 160,000 books and manuscripts during his lifetime and acquired a large house in Gloucestershire to store them.

Tsundoku, on the other hand, is about a desire to read the books one purchases… but never actually doing it.

Who said you had to read those books?

From a Westerner’s perspective, tsundoku could feel frivolous or wasteful, but the term does not seem to have this connotation in Japan.

Assuming we don’t have a tendency toward hoarding and bibliomania, why do we buy books we’ll never have time to read? Fundamentally, I think that tsundoku stems from a desire to read more, to grow in some way, to broaden our horizons through the worlds we explore within the pages of books. Those worlds might be fictional or nonfiction, but they are real to us when we are reading.

Of course, I’m sure there are other reasons people collect books, such as:

But I also have a more profound theory. I believe that by engaging in tsundoku, we are buying ourselves some time, each new purchase extending our life by a few hours.

Because death can’t possibly come until the last book in the pile is read, right?

As French author Jules Renard wrote in his journal, “When I think of all the books still left for me to read, I am certain of further happiness.”

[novashare_tweet tweet=”Tsundoku is a remedy to the false notion that books should be bought to be read. #books #booklovers” hide_hashtags=”true”]

Is there a cure for tsundoku?

This might seem funny to you—especially since we’ve already covered the fact that tsundoku is not a disorder—but I’ve seen questions people post online asking if there is a cure for tsundoku.

Well, let’s unpack reasons collecting books might be a problem:

If so, then perhaps you should try to resist the urge to get another book … or even get some help if you can’t control your behaviors.

But otherwise, why would you need to be “cured” from tsundoku? You are not hurting anyone by buying books you know you won’t read.

I see tsundoku as a helpful remedy to the false notion that books should be bought to be read. Our relationship with books is richer than this.

Surround yourself with books without shame.

See each book as a companion that can come alongside and support you in your creative adventures. As a compass pointing you toward the person you’d like to become.

Posted in Reading and tagged bibliomania, books, Japan
← These simple questions will help you pick the best next bookUpgrade your digital journaling practice with Diarly →